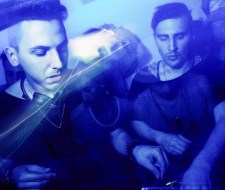 Berlin and London, the two capitals with the greatest impact at European level in the field of electronic music, were allied last January 13th to give life to the fourth edition of an event that begins to take shape and color in the Berliner night.

Wakeful began in 2013 by joining forces with the “WhiteJail guys”, the collective “Made in Italy” based on the British capital who haven’t stopped rocking the dancefloors for almost a year between residences in various clubs and warehouses. Merko Palomba and Fabio Agostini, a.k.a ThanksMate will be responsible for representing a sound that is established once a month at Circus parties in the legendary club “The Egg“, organized by the well-known: Yousef.
The Neapolitans landed very early on the day of the event – a bit tired, as the night before had had a WhiteJail night that brought Rio Padice as guest of honor. After a few hours of sleep and a good shower everything was ready to start for another unforgetable night.

The clock showed eleven when FreedomB began his set. The Golden Gate very soon started to looked crowded and the first attendees began to get warmed by a deep house that turned out to be the perfect start to an event that from its beginning looked very good. “1 am” or around then, Bruno Otranto’s turn took over the situation completely thanks to a very special elegant tech and deep house set which typifies him wherever he goes. The Two hours warm up set got everyone into the vibe and was the perfect way for ThanksMate to culminate an amazing event.
Fabio & Merko delivered a set that was getting better by the minute and they gambled on a different sound as well as underground productions, where people didn’t hear such well known tracks… but proved that “all that glitters is not gold.” Tech House touches, accompained by catchy melodies, were the main elements of their set, that won over an audience which was fully-fledged (I don’t know) by five o’clock. As expected, the closure was given by the Resident DJ’s. Bruno Otranto & FreedomB retook the control of the DJ booth by a B2B full of “dancefloor bomb” tracks which stole more than a smile and caused some Wakefulers dancers to change their shoes the next day.

09:30 am in the morning, with the first rays of light coming through the cracks of the Golden Gate window, covered with stickers and other adherents, was the perfect time to finish the fourth night. The next date is on the 22ndof February 22, this time in London.

WAKEFUL will keep you informed…..