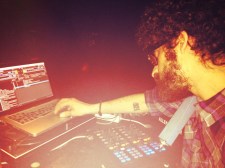 On February 17th, Wakeful had the pleasure of hosting one of those artists that are not that often on the German capital but that when they do, leave a sweet taste to all those intrepid who decide to dance to the rhythm of their electronic beats.

One of the artists in shape within the Spanish scene and the favourite resident DJ on “GOA Parties”, held monthly at Fabrik @ Madrid, was the guest of honour to celebrate the veiled fifth which again took time of opening but not closing.

Marcos Muñoz A.K.A Marcos In Dub, artist of the German Record label  “Highgrade Records” but with Hispanic roots, came with batteries charged and ready to conquer another Berlin club to add to his palmares where are places like Ritter Butzke, Arena Club, Stattbad or footballer Panorama Bar.

The night began atypical since the club was with people because of the previous party which apparently decided to extend more than the expected. This didn’t care to the Wakeful guys who only had to follow with the good atmosphere installed on club at 23:00. Bruno Otranto was responsible of the opening. He decided to increase the pitch to go from the deep-house up to the tech house sound, that was just perfect  for an audience  calling for shouting something else of movement after long and intense hours of deep imposed by former DJ’s. Next to take up the slack to Otranto was another “DJ of the House”, FreedomB, that continued with the guidelines set by your partner, but adding to his playing Funky/House that characterize his sets.

With the Hall to overflowing and an atmosphere never seen in Golden Gate, Marcos In Dub took up the baton at 3.30 in the morning. Dancefloor sound to which we are accustomed the Spaniard, working to perfection as usual, with a public from  diverse cultures that never stopped to dance during the 3 hours set.

After this and as the cannons dictated, Bruno Otranto & FreedomB, returned to the charge to offer their classic b2b which was again very grateful attendees, whose at those hours in the morning moved from one side to another side in search of that track that made them endure a bit more. As you might expect, that sounds like should be the end of the story until suddenly and without notice, In Dub, picked up the witness again to carry out a closing set ended at nine in the morning between light rays and applause in the form of gratitude.

With some of accumulated fatigue and need for a few hours of sleep, here we close another chapter that it will be reopen next month of March with a very special event.