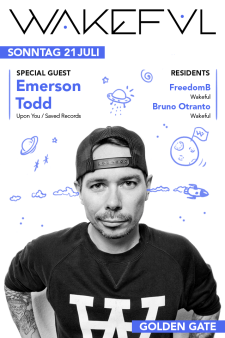 Wakeful is back on the road. In July we will present Emerson Todd,one of the best artists of the electronic music scene worldwide.

Looking back much further, than he has been the first time to a dance club, c’s musical heritage arises from his very young age. Going to festivals as a child and being named after a progressive rock band, he hasn’t had a really different choice than becoming a famous DJ.

Since then his music journey has brought him from New Zealand to Australia, to London and now to Berlin. Emerson has honoured such labels as Saved Records, Upon You, One Records, Cocoon, Get Physical, Souvenir Music or My Favourite Robot; a diverse selection of labels for an artist whose inspirations and sets come from an equally diverse background.