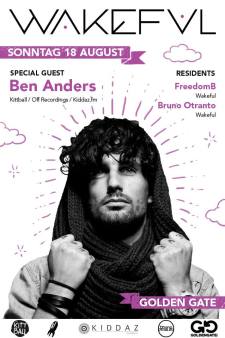 Wakeful is back on the road. In August we will present one of the best artists of the electronic music scene in Germany.

Ben Anders is one of these artists, if not the embodiment of this way of life. Ultimately dedicated to his work, his passion is clear whether he is speaking through words or through his deeply musical, yet strikingly state-of-the-art House music. During his youth, he discovered electronic sounds through electronica and early House music. After some time he was seduced by the german house and minimal scene.

Ben Anders music could be described as a mix between low minimal wounded grooves and deep funky and groovy tech/house sequences.