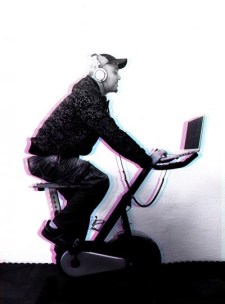 Last weekend we had a special Sunday at Wakeful. We presented Samu as a new resident DJ to accompany FreedomB & Bruno Otranto, in order to provide fresh air to the DJ couple and the event. From now on Samu is joining us every second month.

We woke up early to be with the duo in the open air that the French Cabaret crew did in collaboration with Mischwerk.fm. They decided to stream the event from twelve noon until twelve o’clock. A deep sound was transmitted for breakfast for the first dancers who were close to the venue Golden Gate. The set lasted until three in the afternoon, when both DJs decided to enjoy the magical atmosphere, which often is found in this kind of events when the weather is amazing in the German capital.

Wakeful started at eleven pm with Bruno Otranto. A 100×100 concentration was delivered by BO in the first moments of his DJ set, which was emphasized by a “berlin sound” that worked perfectly due to some melodies and vocals that characterizes a style that seems to be well known by a strong party crowd in the Berlin city.

FreedomB continued the night by mixing a funny funky vocal set with a lot of game between kicks, hi-hats and bass drums that created a perfect introduction to the performance of the “guest” Samu, the new resident DJ of the Wakeful nights.

Having participated in the “Eastern Festival” in March and the open air that Wakeful did at Lichtpark with Fact Berlin the owner of Novo Music, Samu, left a good taste for more und thus was introduced as the third resident DJ at Wakeful from now on. To start with, Samu choose to play a set of tech-house for the dancefloor, a set that ended around half-past five.

To close the event, we enjoyed a special b2b between Bruno Otranto & Samu, who was a perfect substitute for FreedomB. Two hours of electronic music HQ for the entire Wakeful crew, pushing us in the right mode to start the new week.

After an exhausting day, Golden Gate closed its doors at seven o’clock waiting with bated breath for a new Wakeful dose in July.